This is the cultural anchor for the Design District and is free of charge. The 37,000 sq. ft  building was designed by the Madrid based firm Aragurent Gallegos Arquitectos.

ICA Director Ellen Salpeter states,  “Our mandate is to show the most innovative work being made today.” 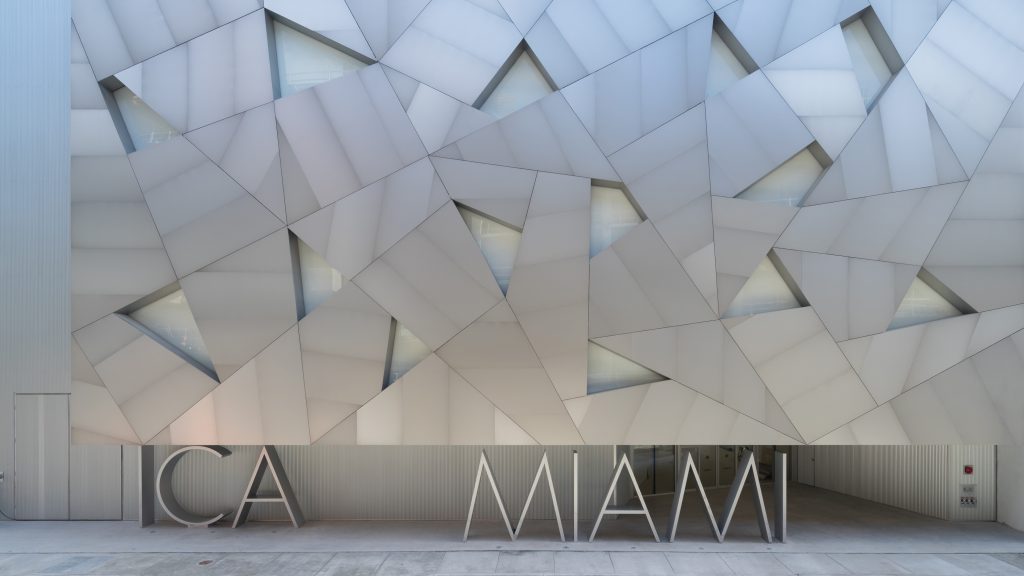 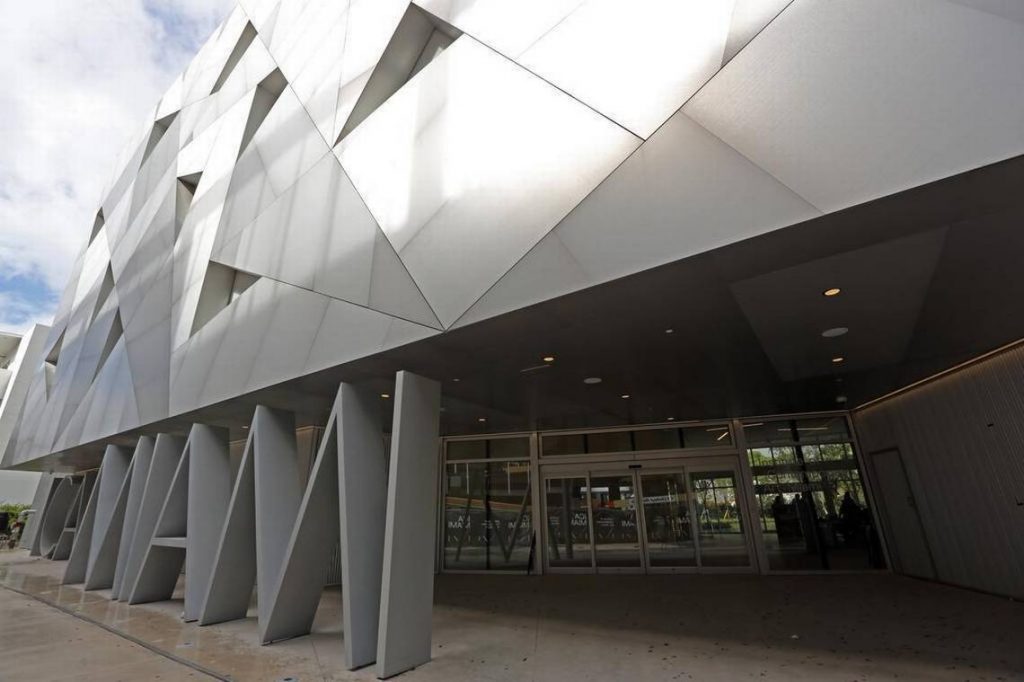 The elegant entrance sits in striking contrast to the parking garage across the street, pictured below. 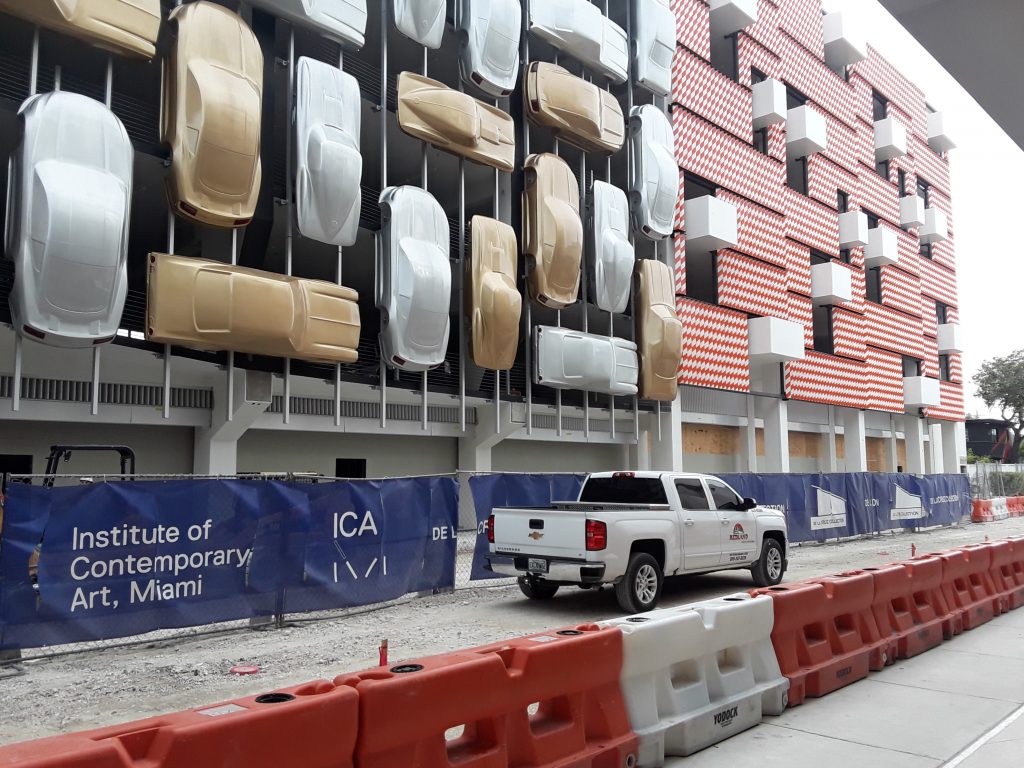 They’re rushing to install the garages cladding screens that were designed by different artists.  It’s rather fun! 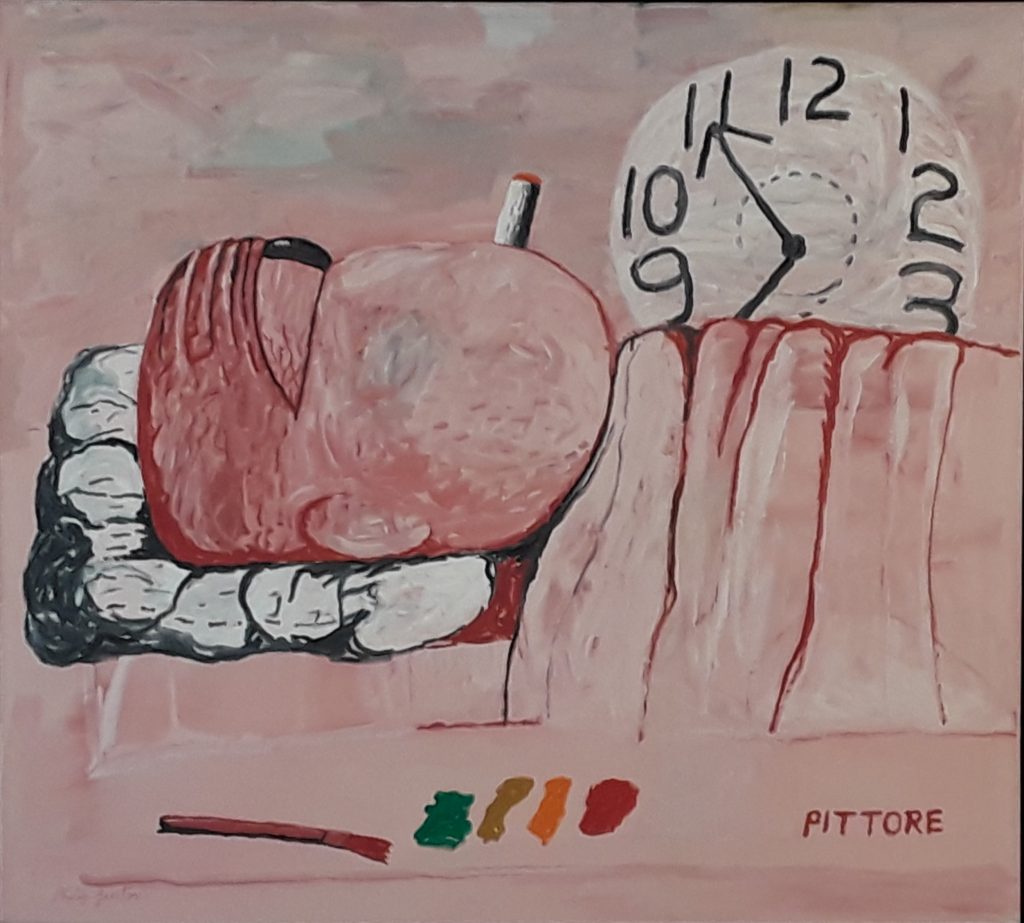 Who else?  Phillip Guston.  Born in Montreal, his family moved to Los Angeles when he was a child.  He spent much of his life teaching art as a way of supporting his art practice.

These examples of his work after 1970 are characterized by gross cartoon like images.  I feel uneasy looking at his work from this period.  And I think that’s his point, taking a 360 degree turn from painting refined abstracts.

It was a slap in the art world face at a time when  abstraction was revered for its purity and autonomy.  This work was met with hostility when it was first shown.

He was concerned with figuration, reflecting social upheaval, the cruelty of the world, and, more personally, the isolation of the painter in the studio.

This theme of the artists’ push against creative isolation resonated for me throughout much of the work I saw at the ICA. 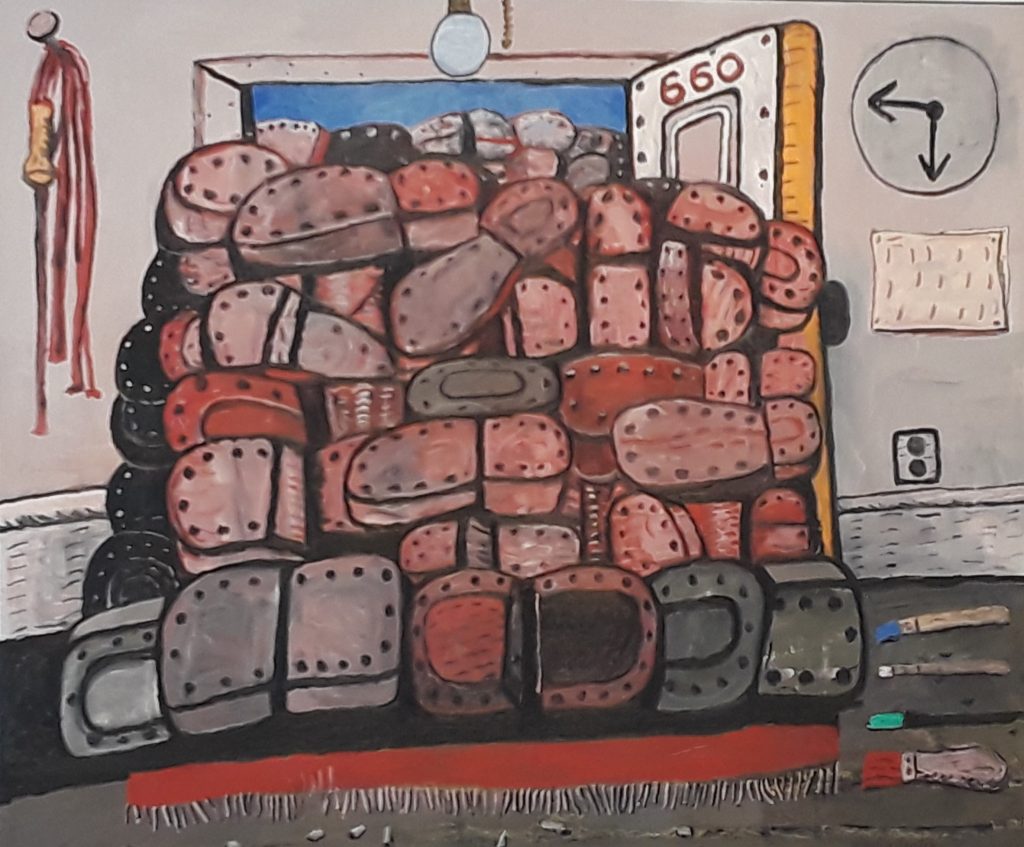 I get the feeling he’s making a comment on the ‘rat race’ here.  I like the whip like image on the wall to the left and the discarded paint brushes. 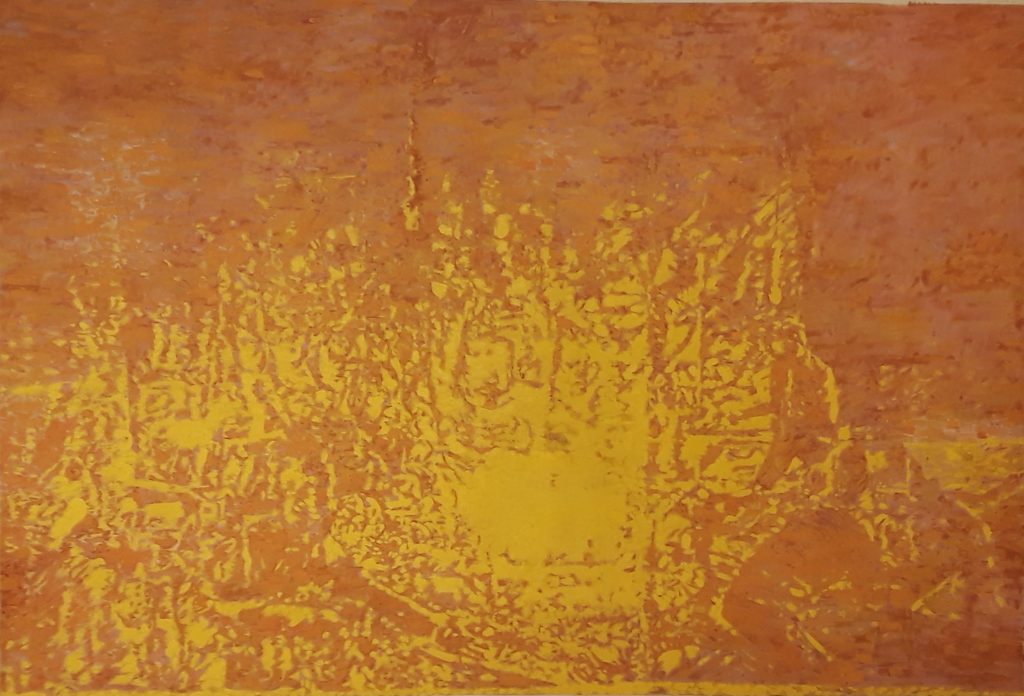 There were eventually fifty people associated with the group between 1968 and 1982.

They produced pieces typically associated with conceptual art:  journal writings, text-based work, ephemera and installation.  The group challenged the very nature of the contemporary artist, working cooperatively and collectively.  No artists isolated in their studio here. 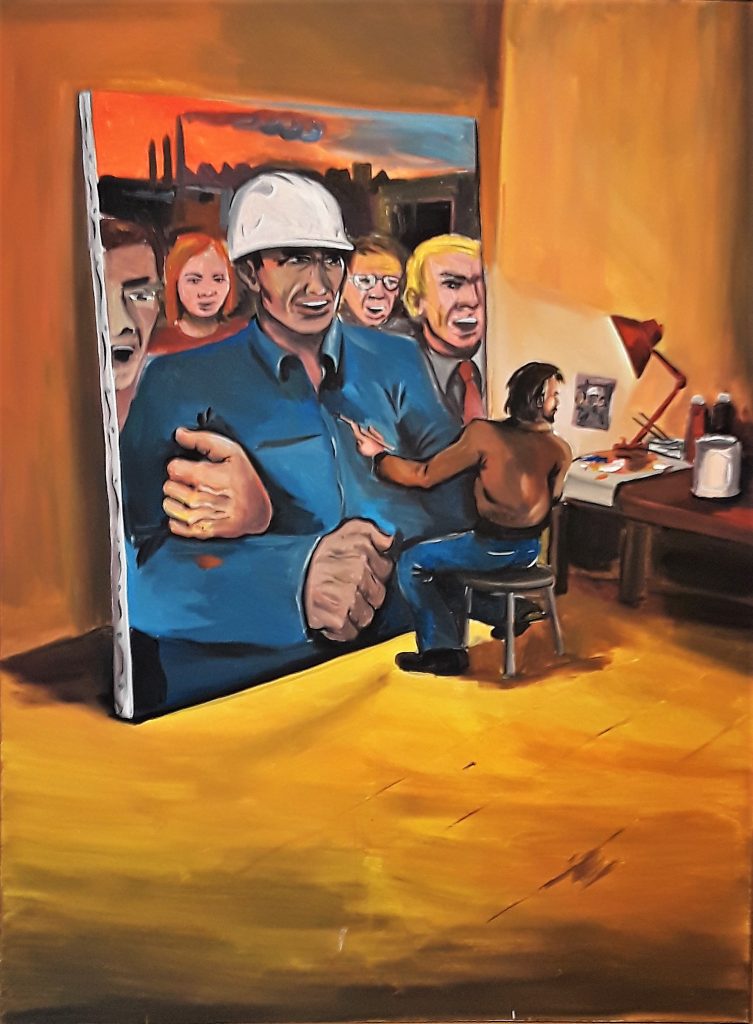 The Studio at 3 Wesley Place Illuminated by an Explosion Nearby, (which is represented in the painting above)

One of a series of large scale paintings dedicated to the motif of traditional studio work.  The work is ironically referring to the popularity of expressionist painting at the time, and challenging the strict formal vocabulary of Conceptual art. 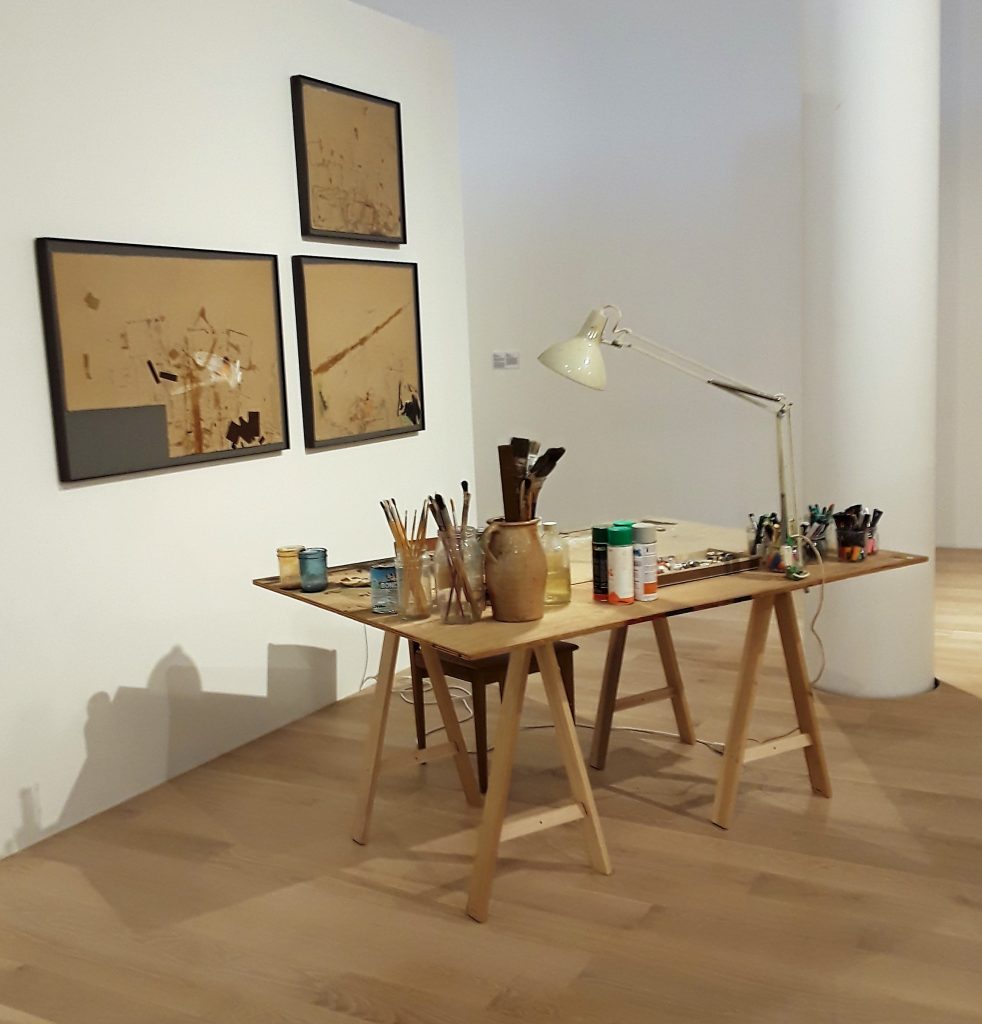 Dieter Roth has turned his studios (Iceland, Germany, Switzerland, and the US) into sculptures in his quest to merge art and life.  The process like Table Hegenhelmerstrasse was built from 1980-2010.  He’s a relentlessly prolific artist.

His son, Bjorn Roth, works with him so as to expand his practice into a social organization.  Dieter Roth has also made ‘trash pictures’ combining garbage, chocolate, and collage, in a process of permanent decay. 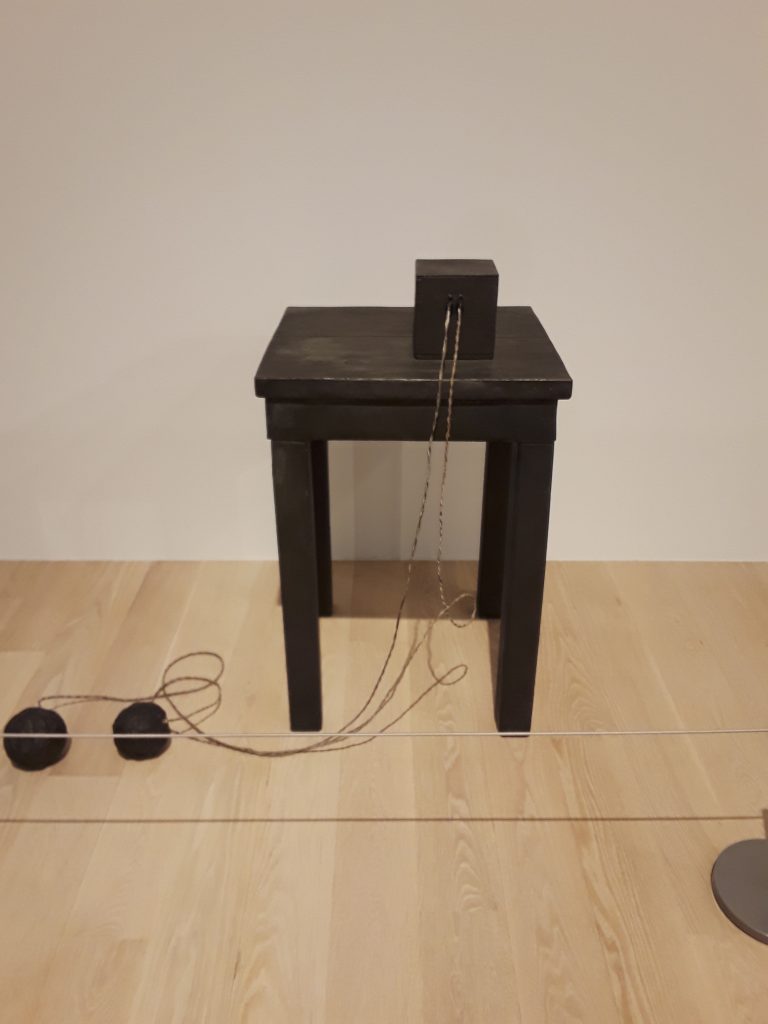 I’m always very moved by the work of this artist.  A groundbreaking figure in German and International art, Joseph Buoys also uses his studio as sculpture.  This piece is part of a large scale installation.  These enigmatic forms seem both sinister and humorous.

I think that Buoys experience in WW2 in Nazi Germany, his time in the Luftwaffe, as well as on the ground as a soldier, has had a profound effect on his art practice.  I’ve seen other installations of his work in Germany.  They have a sense of austerity, foreboding, and mystery. 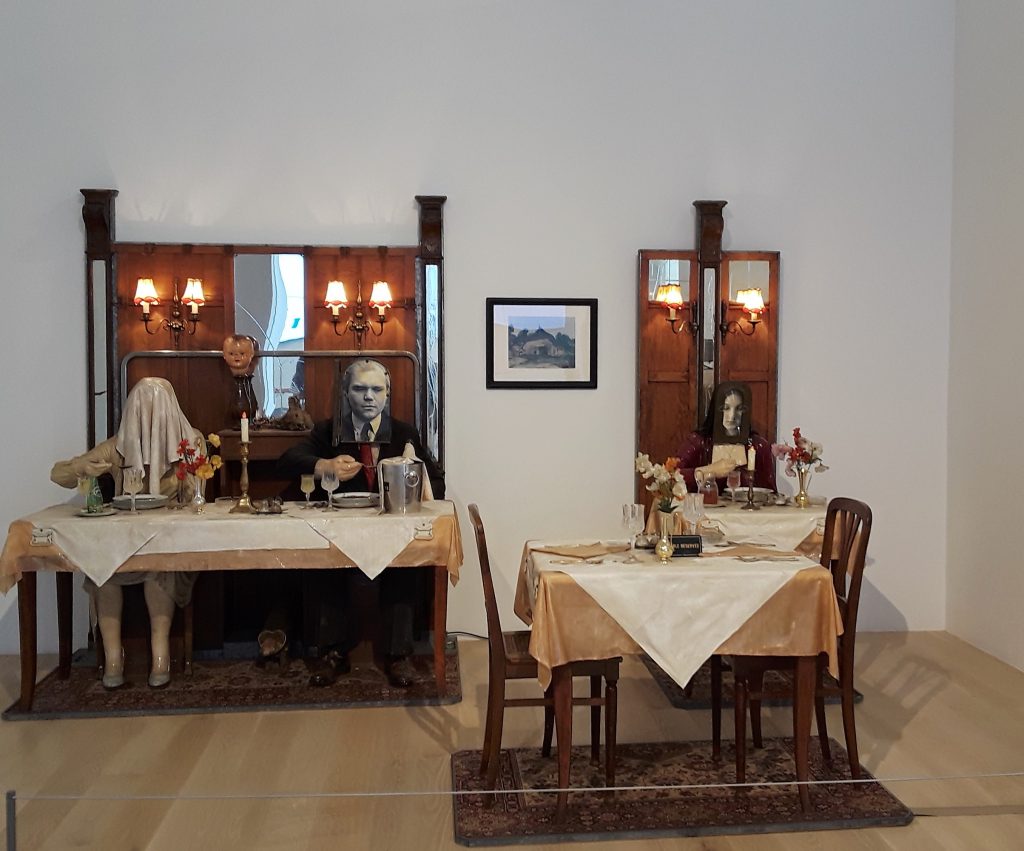 The Soup Course at the She-She Cafe 1982

Here are two married artists who are best know for their installation work. 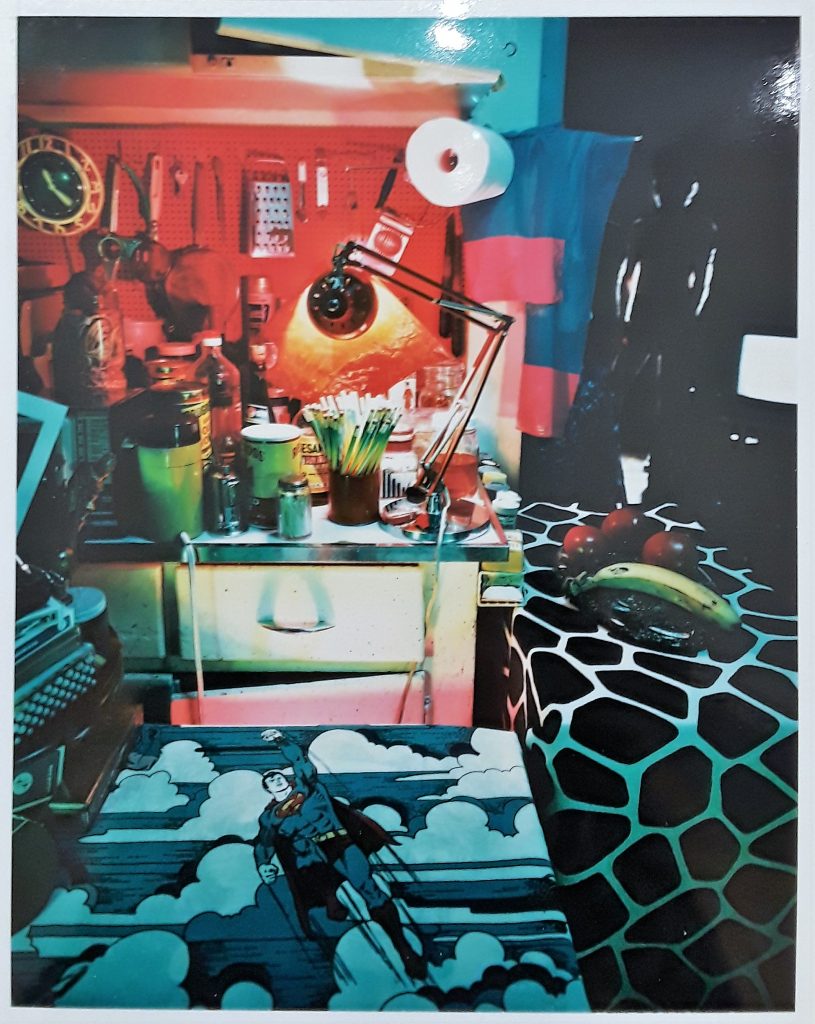 Sandwiched here are Still Life,  polaroid works of Lucas Samaras.   This artist had a big impact on my work when I was a student at the Alberta College of Art and Design.  I was studying painting.  These small pieces, taken in his studio, are painterly and intimate. 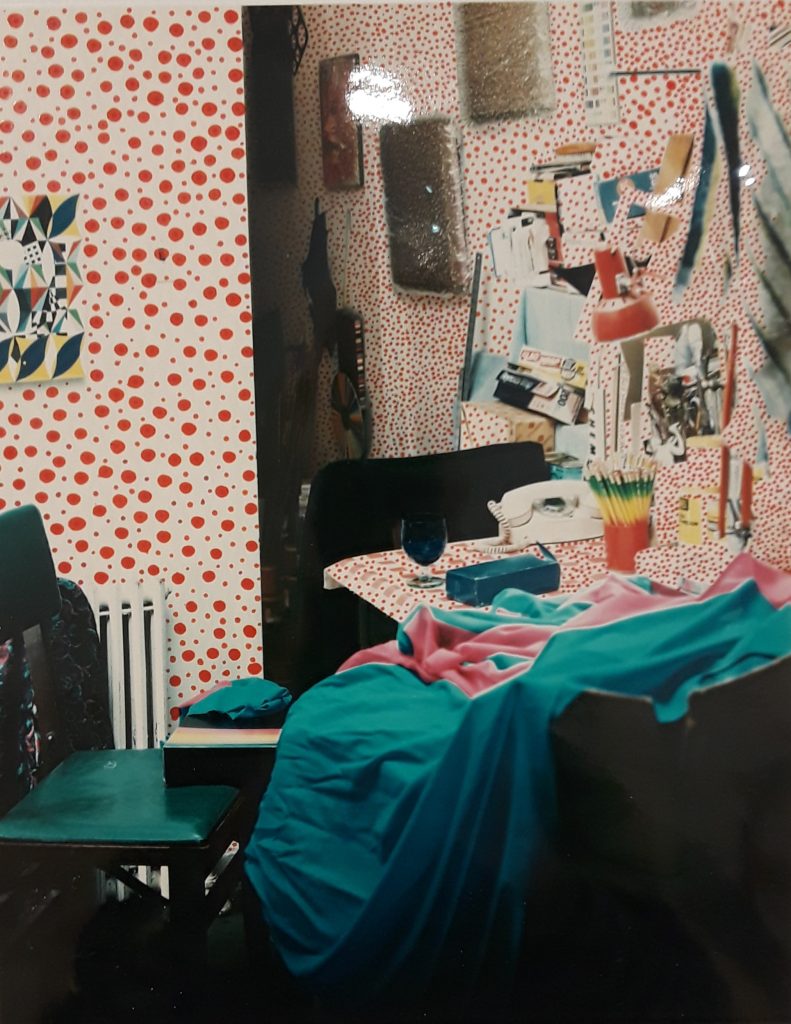 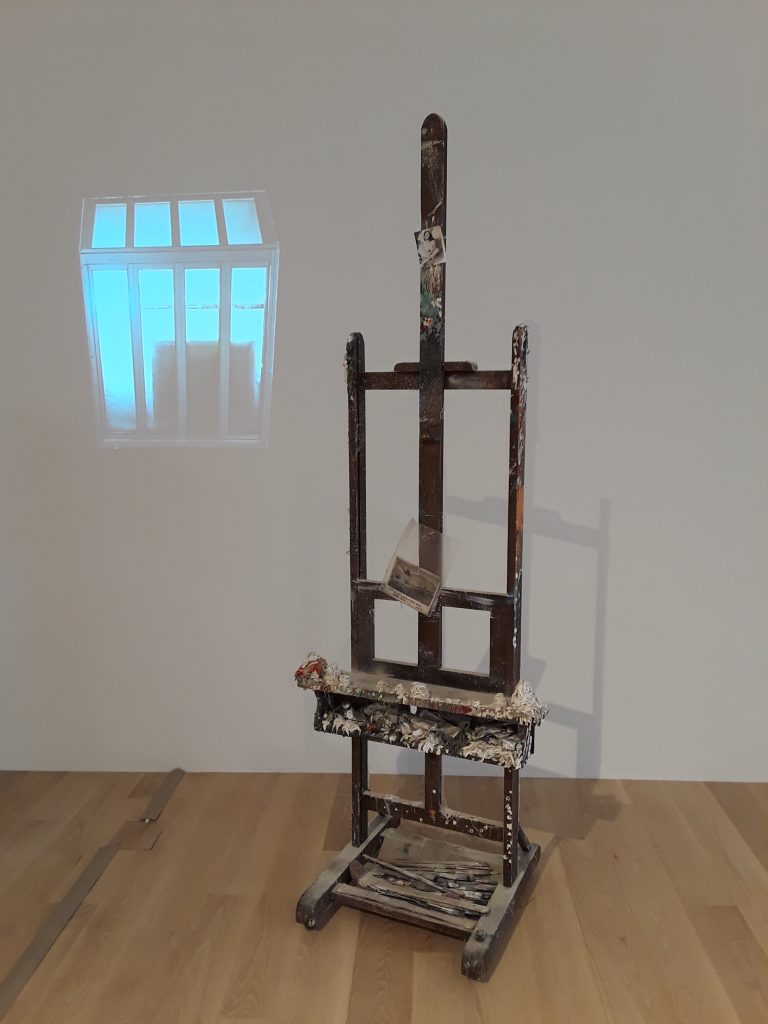 This German artists work critiques and reflects the conventions of art making.

In O-Ton, the dusty paint encrusted easel might be interpreted as the death of painting. Cat’s-eye depicts a window with an obscured view, referencing the ‘window on the world’ of painting. 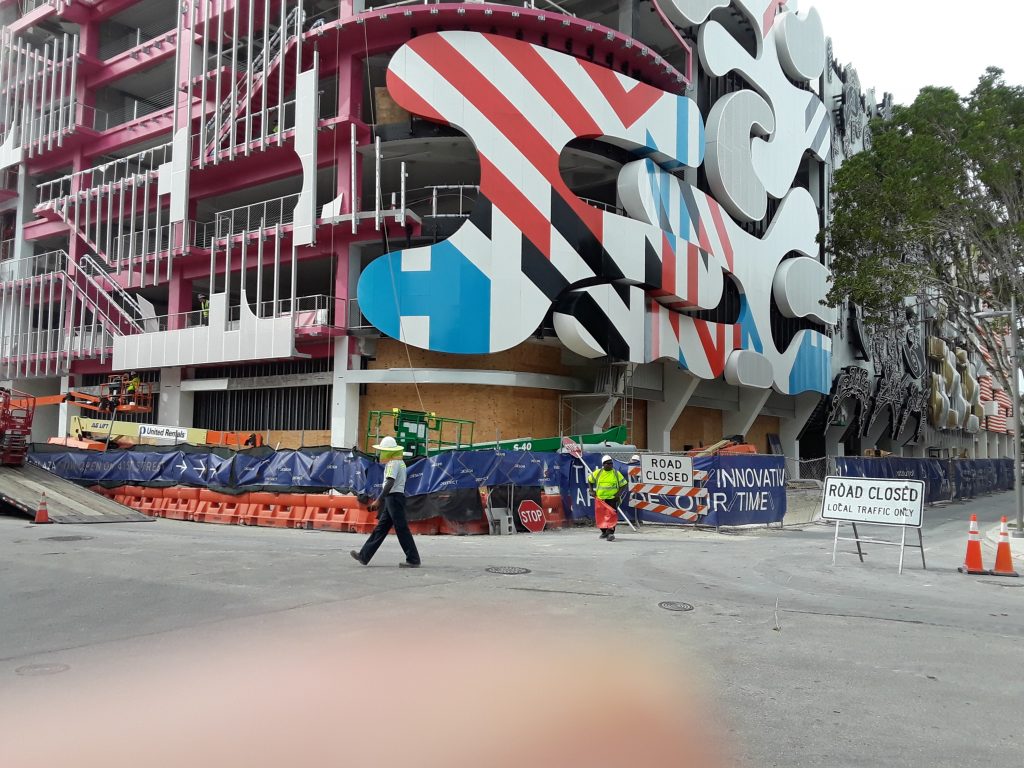 The work I saw at the ICA provided me with lots to think about in my own art practice.

As I leave, they’re still working on the parking garage.  Can’t wait to get back to Miami and the Design District to see it completed.