Valpolicella:  Chesini and the Art of Amarone

View toward some of the old valley estates in the wine growing region of Valpolicella.  35 degrees C and no wind.  Grapes ripening on the old vines.

Above the valley, a hilltop wine estate, Chesini, and their recently restored 16th century tower.

Behind the artful label, a truly wonderful Amarone.  Large glass full at 10:30 AM.

Top of the tram line above Bergen, Norway’s busiest port and gateway to the the Fjords.

Buildings dating from the 14th to mid-16th century in Bryggen, the port of the Hanseatic Leagues trading empire back in the day.

Bergen is a UNESCO World Heritage City, and works hard to preserve the timbered buildings in Bryggen.  No mean feat as they are sinking.

The Bergen Art Museum is housed in three impressive and separate buildings beside Lille Lungegardsvann lake.  Each building houses its own impressive collection.

Entrance to the Museum building that houses the substantial Rasmus Meyer Collection.

I might have titled this The Knitter.  Norway is still dedicated to knitting and preserving its knitting history.  There is a knitting museum in Salhus, near Bergen.  A  former knitting factory that started production in 1859, it was one of the first such factories in Norway.  It closed in 1989 and re-opened in 2001 as The Norwegian Knitting Industry Museum.

Knitted products can be found, and bought, everywhere in Norway.  Piles of warm things to wear, a necessity in the chilly Norwegian climate, are seen here in one of the squares near the  Bergen harbour.  I love many things about Norway:  the jaw-dropping landscape, the sea food, and the Norwegian style and sensibility, manifest in colour and materials.

Tattoo and piercing parlour in Bergen.

Up close and personal.

Drawing the line in Bergen.

Four museums in One:   An elegant building that, in its pale and austere simplicity, is the perfect foil for its surrounding neighbours in the Museum Quarter.  Inside, Modern and Contemporary Art,  Works on Paper,  Museum of Architecture, Museum of Design and Applied Arts, and, in a surprising subterrainian space, an excellent contemporary jewelry collection.  Achtung!  Achtung!  you say.  But wait, there’s more – because it was Sunday, admission was only one euro. 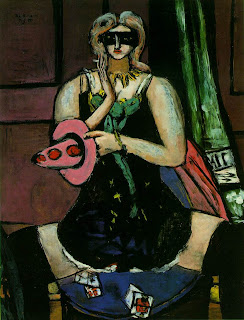 In the Modern and Contemporary Museum within the Pinakothek der Moderne, a thorough exhibit of 90 important  paintings from major international museums and collections.  Munich has excellent Beckmann holdings and he is well represented here, with many  narrative pieces that are strong and disturbing in their intensity.  This is true of the de Koonings as well, with their red hot energy and urgency.  Some of Picasso’s early work (1920’s) is spare and has a more contemporary look than later pieces from the 1940’s.  It crossed my mind, standing in front of a large lewd and riotous Beckmann tryptych, that this was painted long before the internet, and it’s pornographic base.  The role attributed to women in their art is certainly one way to describe this astonishing exhibit.

Museum Brandhorst
New neighbour to the Pinakothek, it’s a two storey rectangular building clad in 38,000 ceramic glazed tiles.  A colour box that houses an international collection of modern art.  Sauerbruch and Huttons Architects brought this one to life.  Gorgeous.

Turkentor and the Large Red Sphere
Walter De Maria’s magnificent marble ball is housed in this single work art gallery built in 1826 for the Royal Bavarian Infantry Lifeguards Regiment.  Another worthy  neighbour to the Pinakothek and Brandhurst.

Surfing the Eisbach at Haus der Kunst
No lifeguards on duty here.  Smack dab in the centre of Munich and at the edge of the English Garden, Sunday surfers ride the main wave.
Tagged with: Arts, culture, Europe, Germany, Munich, museums, surfing

Thanks for taking a look at my blog. Right now, it’s the only way to see a bit of my work on this website.

My crack team of web designers is hard at work developing a much bigger and better site.

In the meantime, you are welcome to contact me to easily arrange a studio visit for a firsthand look at the work: